So you found yourself with a dirty filter and you need to replace it. Just one of the many chores that come with being a homeowner and a very important one at that. Sure its a 10 second job to pull the old and replace with the new but the 10 seconds it takes will pay off big dividends for ~7,776,000 seconds (or 3 months), possibly even longer depending on how well your ducts are sealed and the quality of air around you. The equipment (Air Conditioner or Furnace) do the heavy lifting but the filter, that little lady, well she’s the one making sure that system of yours is running smooth. 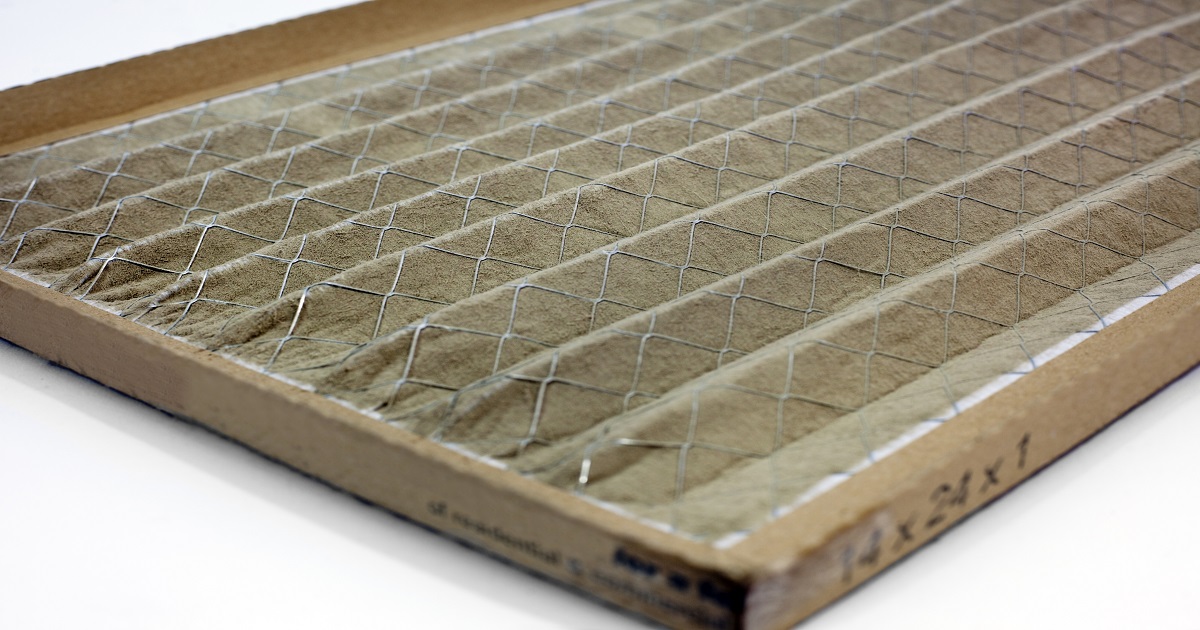 A dirty filter will cause:

So pretty soon, what could have cost you ~$10-$20 in a new filter might cost you a big repair or even the need for a new system in severe cases as dirt and debri are major factors in premature failure of the system. But there are so many choices out there now with many different benefits and numbers on them. Lets start with the “MERV” rating/number since it is the industry standard.

MERV stands for Minimum Efficiency Reporting Value and they vary from 1 (the least efficient) to 20 (the most efficient). For residential use there isnt much need for anything greater than a 13 unless you have some serious health concerns and have been advised otherwise. The higher the efficiency, the more particles the filter captures since the weaving becomes tighter. For instance, something for general filtration like an 8 MERV will filter down to about 10 microns while the higher end ones such as a 13 MERV filter down to about 0.3 microns.

Common particles a filter is designed to catch are: 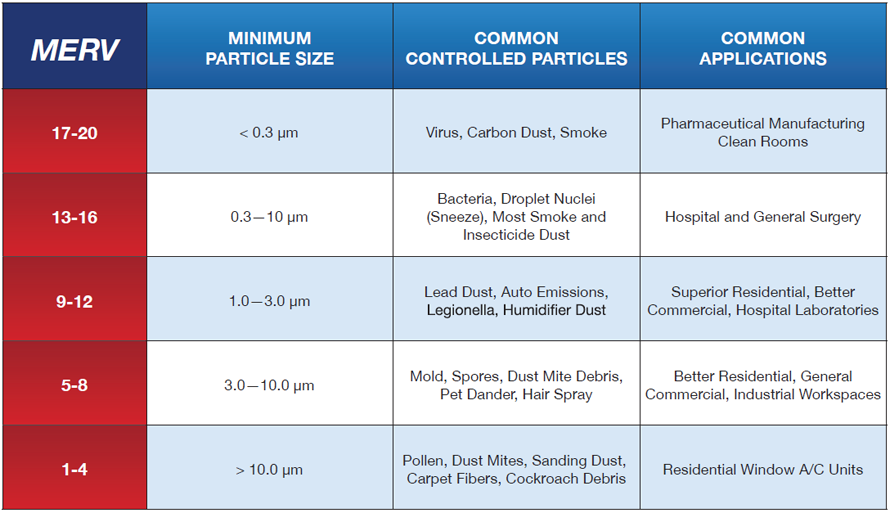 Which number is right for me, you ask? Well….. thats dependent on different factors around your unique lifestyle.

Do you smoke? Smoking always comes with a price and like anything else its going to cost you a little more if you want to enjoy a smoke but care about the rest of the air around you. I think many people are becoming more aware of its negative effects and take their smoking outdoors but I know there are people still out there smoking in their living room. This isn’t just bad for discoloring your walls and ceiling or making furniture reek in that specific room… ohhhh nooo, its also getting sucked through your return, through your filter and right back into your living space. Except this time its being spread out across the entire duct system and not just where you were smoking. The good news, depending on how you look at it, is once you get to about a 13 MERV the filter will catch “most” of the smoke particles.

Do you have a pet? A basic MERV 8 can handle the job of pet dander but this is also dependent on what kind of dog you have and how bad they shed.

Do you have allergies? Again, a basic MERV 8 might serve you well but each person has different allergie concerns so its difficult to say. A MERV 8 will tackle household dust and pollen but if you wanted to play it safe, a MERV 11 will gather any mold spores or outdoor pollution. 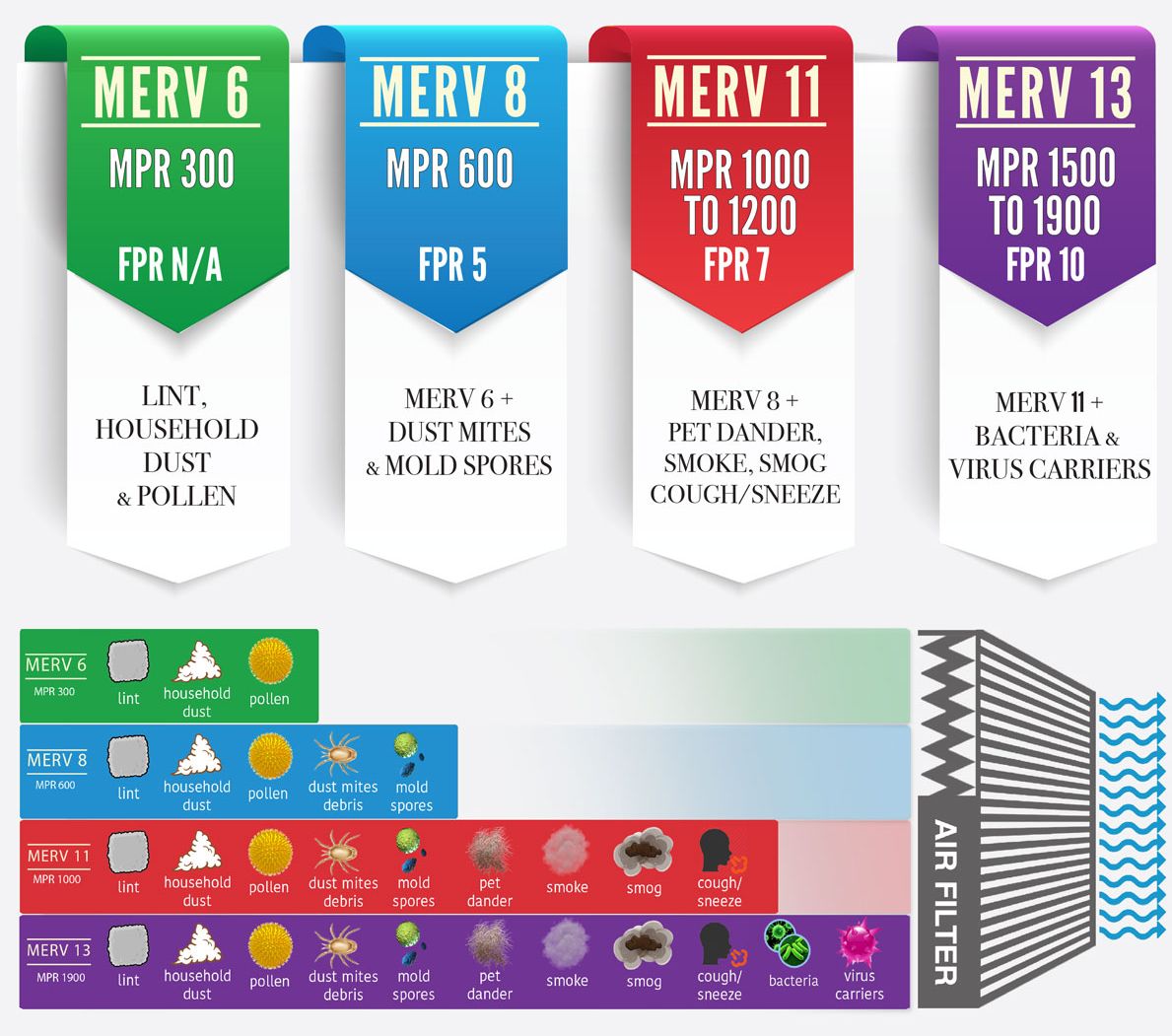 These are some of the bigger factors when considering a filter but there are others. You might see other ratings on the filter such as MPR (Micro-Particle Performance Rating) and FPR (Filter Performance Rating). While MERV is the industry standard and was created by the American Society of Heating, Refrigerating and Air Conditioning Engineers, MPR was created by 3M and FPR created by The Home Depot.

While some of this might seem overwhelming or confusing, contractors and various companies are making it easier than ever to ensure you have both the proper filter and that it is being changed when needed. These filter exchange programs provide another layer of “peace of mind” to your life and remove one of your many chores. This could also be part of a maintenance agreement program your local HVAC contractor is offering. Bottom line, know which filter fits your personal lifestyle and environment, then make sure to change the filter routinely so your system is running smoothly for years to come and your indoor air quality is great.